It’s been four years in the making and at last, our campaign for Age UK has launched. 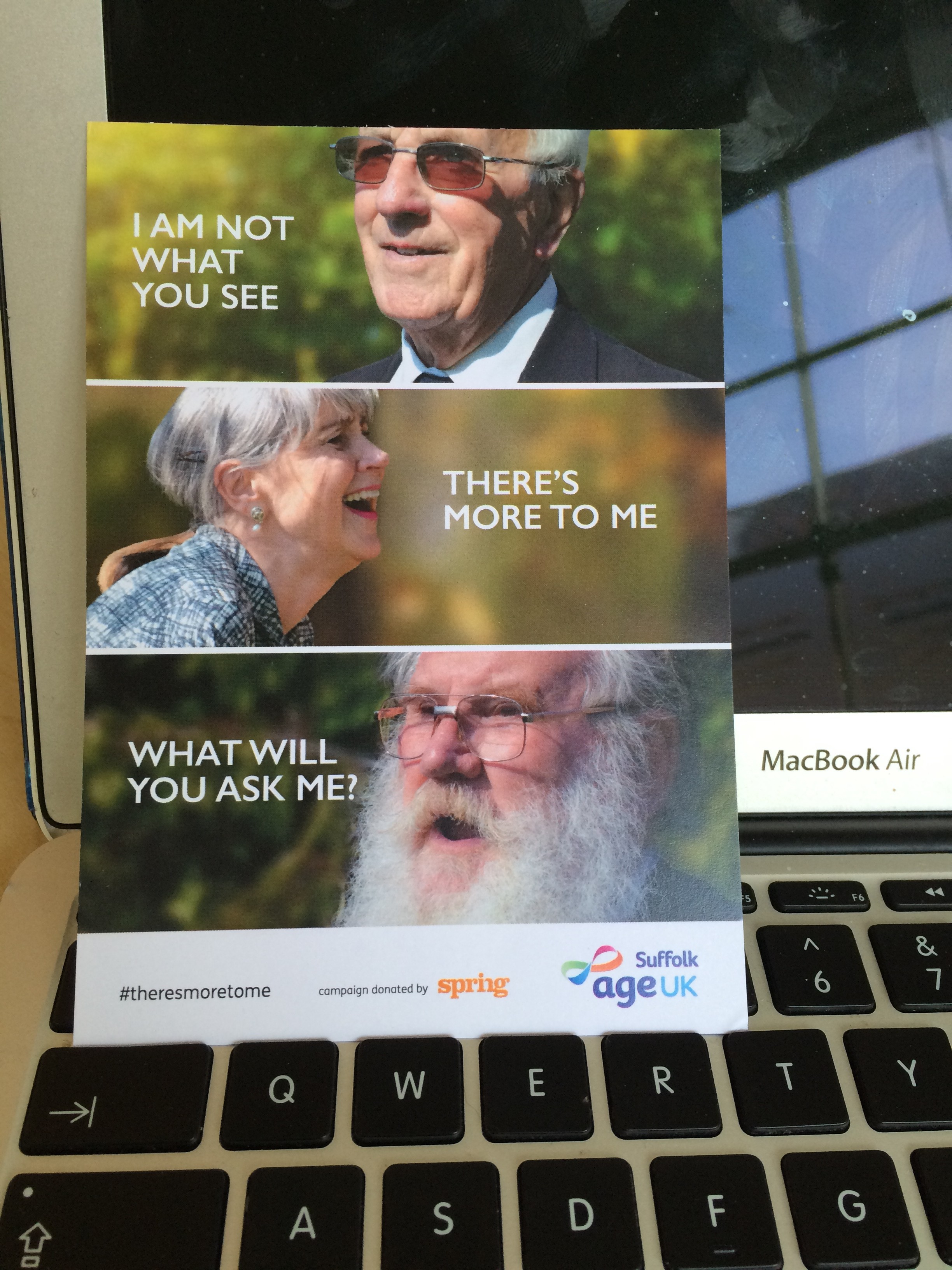 It’s about breaking down the barriers between generations, equipping everyone with the tools to launch fascinating conversations that reveal the rich details of people’s lives, creating an emotional connection between them.

This year, of all year, Age UK Suffolk is dependent upon the generosity of people and businesses in this county to support their great work. With funding cuts eating into the budget for crucial services, it’s essential that this year’s campaign forges an emotional connection between Age UK’s clients and potential donors.

I’ve been working on this campaign since I found out in 2012 that the charity was only the 14th most (or least) supported charity in Suffolk. That bothered me, both as a daughter and as a businesswoman.  We have an ageing population, increasingly disparate communities and Age UK’s work is vital. Yet there’s often a sense of separation between younger people and their older neighbours. Every square mile of Suffolk, on average, is home to ten lonely older people. That’s simply not right.

I wanted to find a way to create a better connection between the generations. In this age, where few families sit down for dinner together and Granny is often miles away from younger family, that’s an important thing to do. So Age UK’s campaign for 2016 is all about finding shared conversations, getting to know people and unlocking the stories of their lives.

The campaign, which we are calling ‘There’s More to Me’, makes the point that everyone you meet is not simply what you see. They are a treasure trove containing every song they’ve heard, every place they’ve been, everyone who’s been part of their lives. And all you have to do, to unlock this treasure, is ask.

Our starting point for these conversations is a film. It’s a short, affectionate and celebratory piece in which we meet a small group of Suffolk people and they share this thought with us.

So what will happen with this?

Age UK Suffolk is building this theme into their work with the elderly, including into their dementia support programme. This taps into research about the immense value of unlocking memories for people who are living with dementia. It will also improve the quality of conversations between carers and older people, adding to everybody’s quality of life.

Age UK is also creating a schools activity programme around this theme. This will help younger people and older people in our communities to meet, will oil the wheels of conversations and allow them to find things in common and to discover each other’s stories. We have created a short questionnaire of topics guaranteed to unlock people’s fascinating stories and break down the barriers between generations.

The stories we discover will go onto Age UK Suffolk’s website, giving the charity a rich resource of information to share, to build awareness of their work and the value they provide to this community.

And this will be the backdrop to a fundraising campaign that uses this theme to directly relate donations to actions. Corporate and private funding partners will be given details of people or activities that they can sponsor. People like to know where their money goes, and the fundraising strategy build around this campaign will allow that to happen.

We know this won’t be easy. Age UK Suffolk, like every organisation, is fighting against cuts and competition. But people don’t stop needing the charity because times are hard – in fact, Age UK’s job gets more important by the day. And that’s why this campaign, to raise their profile, get people talking to each other and encourage support, is so incredibly important.